14-month-olds understand if we have understood it or not 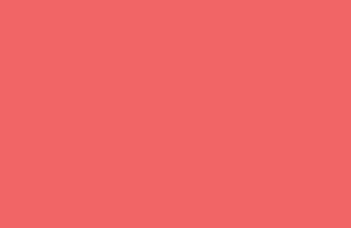 In this research, we investigated whether babies understood when an adult had misunderstood something in their presence. Are babies able to recognize that others may have understood the language differently than they do and may have independent thoughts? To explore this, we measured the extremely weak electrical signals produced by babies’ brains with an EEG system while they were watching a puppet show.

In the study, we named an object (e.g., a toy car) correctly for the babies (they heard “car”) but incorrectly for an Observer sitting in front of them (because the Observer might have thought there was a plush kitten there what we unknowingly replaced with a small car). Our results show that 14-month-old babies notice that the other may have misunderstood the name.

From another experiment, we also learned that babies attribute representations (“thoughts”) of specific individual objects to the Observer. To study this, we replaced a car with another one without the Observer's knowledge. We obtained similar results as in our first experiment. It has also emerged from our research that babies can recognize if the object is labeled incorrectly for them and correctly for the Observer. In some cases, we labeled the newly shown object with the previously used name, so the label was accurate for the Observer. The babies recognized the accuracy, even though the names weren’t correct for their perspective.

From our results, we concluded that 14-month-old babies have the sophisticated speech-tracking ability. They interpret words with the help of other person's thoughts. This ability might be a great help in language acquisition, as it helps to filter out common misunderstandings, mistakes, and false conclusions in everyday communication. 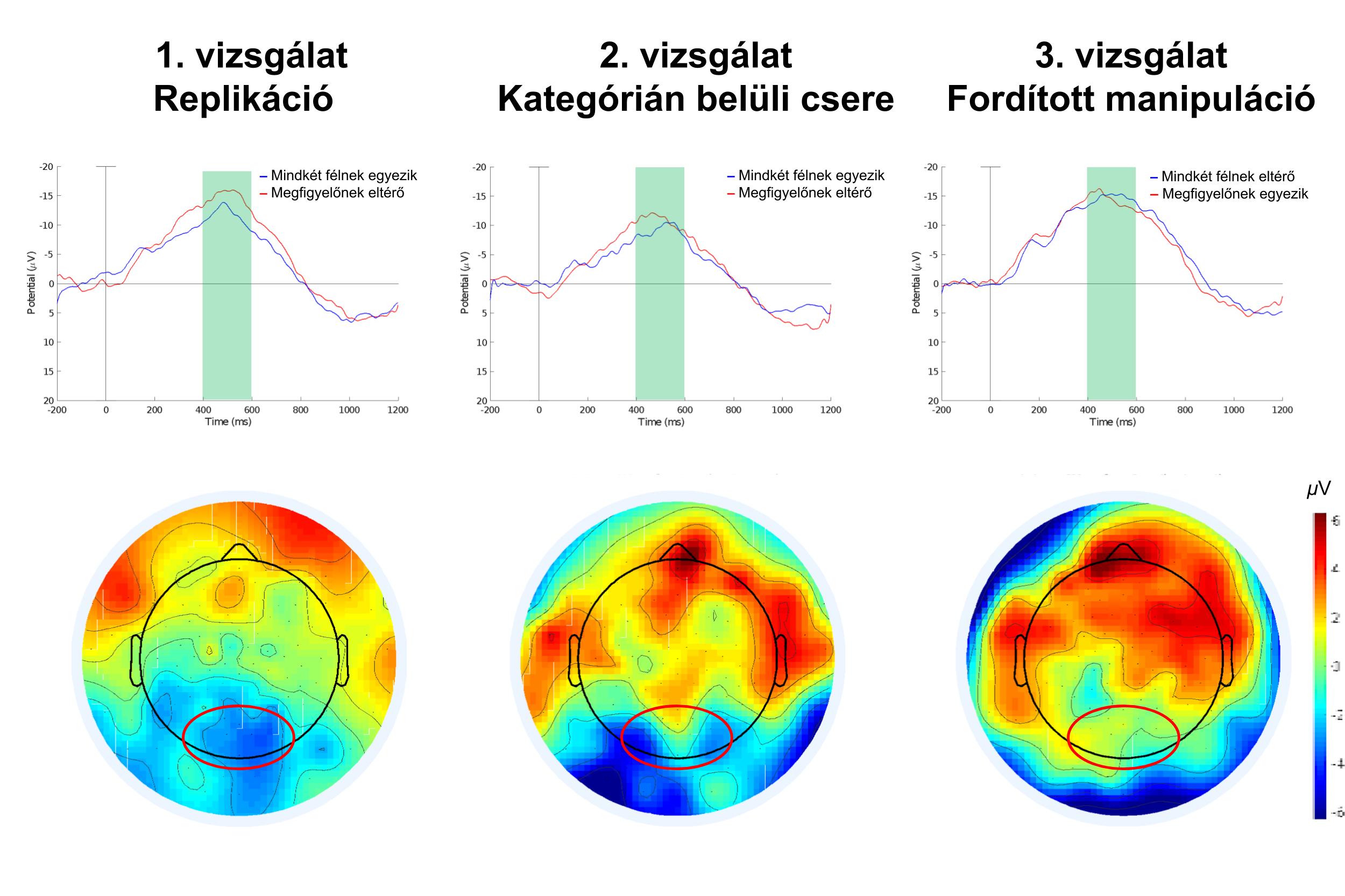 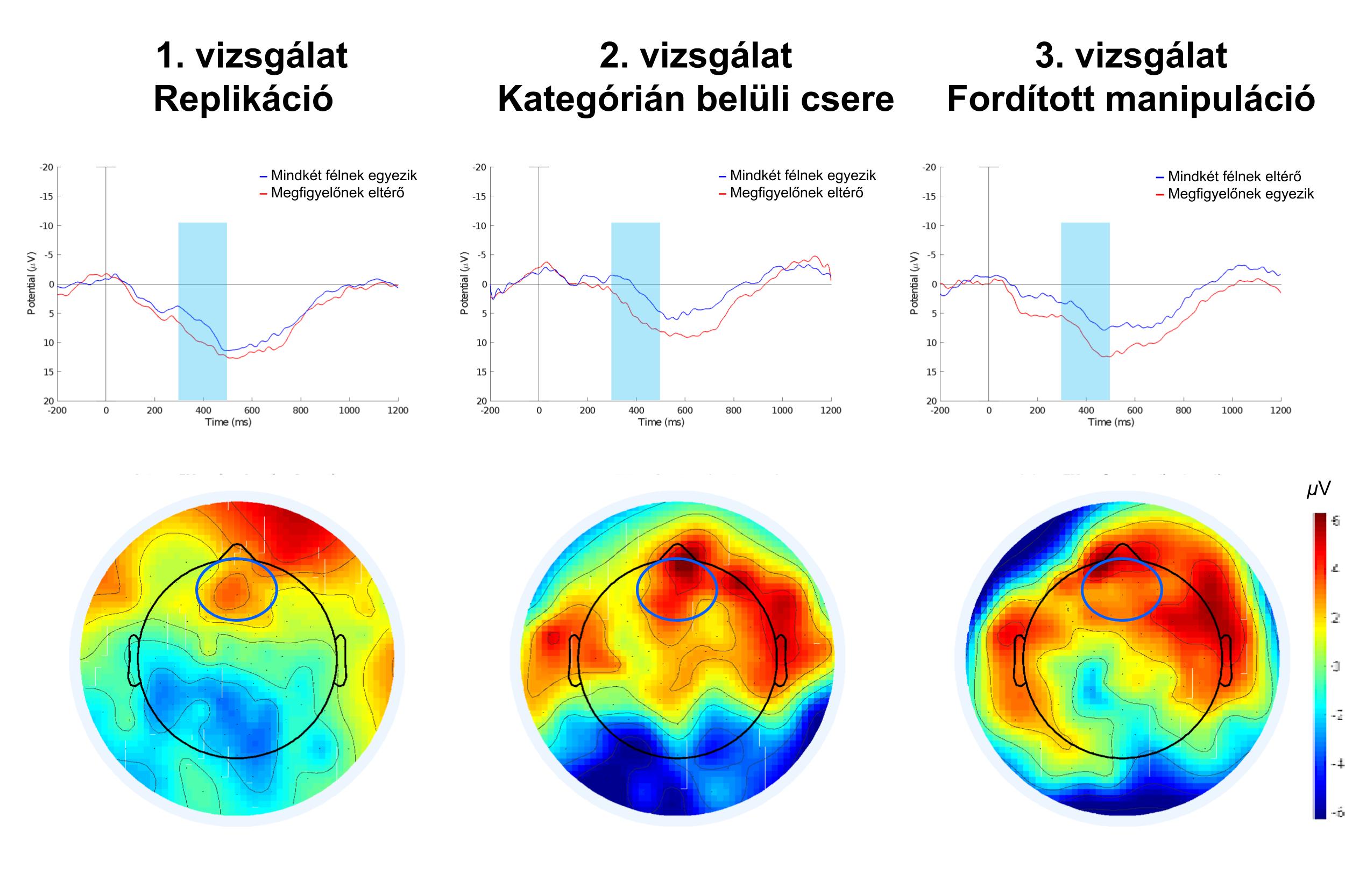 The upper panels show ERP (event-related potential) plots of the grand average of the electrodes over the parietal ROI (region of interest). Negative is plotted upwards, and time 0 is the onset of the audio playback. Green shadings indicate the time window of the infant N400 (400-600 ms). The lower panels show the topographical maps of the ERP difference of the conditions in the N400 time window for all studies. Colder colors indicate greater negativities and red rings illustrate the ROI over which the N400 amplitude was quantified.

The frontal positive-going brain wave in Experiment 1, 2, and 3.

The upper panels show ERP plots of grand averages of electrodes over the frontal ROI. Negative is plotted upwards, and time 0 is the onset of the audio playback. Blue shades indicate the time window (300-500 ms) where we found the effect. The lower panels show the topographical maps of the ERP difference of the conditions in the time windows indicated by blue shades. Colder colors indicate greater negativities, and red rings illustrate the frontal ROI over which amplitudes were quantified.