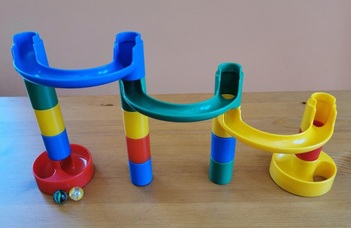 Theory of Mind is an ability by which we can understand and explain behaviors, mental states (knowledge, thoughts, beliefs, emotions, desires, and intentions), and social interactions.
In the early years, children already recognize the intention of teaching, and by monitoring the mental contents of others, the differences and gaps in knowledge become clear to them. In our study, we were curious whether teaching was influenced by position in sibling order, as the number of siblings and the fact that the child was the youngest in the family, based on the literature background, support the development of the theory of mind.

In this experiment, we taught participants between the ages of 3.5 and 4.5 to use a construction game called ball court. Firstly, we demonstrated the game with a video then an experimenter practiced these rules with the child. After learning the game, children took on the role of the teacher by having to teach a protagonist how the game works. Teaching is related to Theory of Mind processes, so we created two test situations to investigate whether it is influenced by how much prior knowledge the person to be taught has about the tool. In one condition, the protagonist entered the room only after the teaching phase, while in the other, she witnessed it.

In our study, model-following, understanding the need for knowledge transfer, and the manifestation of differences in the two conditions was tendentially observed during teaching. Most of the children in the study followed the model in their teaching: the use of verbal communication and showing also appeared, with which most successful implementations were associated. With respect to the two conditions, it seems that teaching how the game works was more successful if the protagonist joined after the teaching phase. Children may have placed more emphasis on knowledge transfer and the teaching process when the individual had no prior knowledge. In addition, the use of verbal communication and pointing presented by the model and the recognition of device use appeared to a greater extent compared to the other condition, when the protagonist was present during the demonstration. An interesting result can also be the relationship between a child’s sibling position and success: The children who were the youngest in the sibling order taught the most, but this was also true for the group of only children.

The need for learning and teaching is also strongly present in the early years, which presupposes the existence of recognition of different knowledge bases. These results confirm the presence and application of the Theory of Mind in knowledge transfer in the early years. Examining children’s teaching processes holds many potential possibilities. It could help to understand the development of their cognitive abilities, which would take us one step closer to expanding our knowledge related to the development of children.