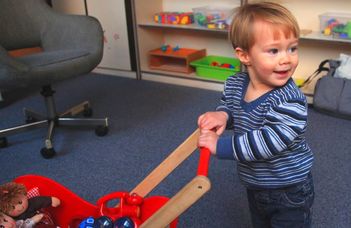 How do children remember? What do they recall from an event or newly learned information? The construction of memories has a crucial role in the acquisition of information and knowledge, as well as in the formation of narratives about individuals and their experiences, but memory skills work differently in early childhood than in the case of adulthood. What is the information that children can remember in the early days? How can they recall where and from whom they learned the information?

From whom did I see this strange toy?

In the case of newly learned information, not only the content itself might be essential, but also its source. In Psychology, source memory is the situational element that we have experienced together with a particular piece of information in the past. Among other things, the ability to recall the source helps us to differentiate between the reliability of facts. For example, if we know that we have heard information about Paris from a friend of ours who lives there, it is worth relying on it instead of the advice we heard from a person who has never been there.

In connection with this, we designed our present research for preschoolers to explore whether the source memory of new information is affected by the group affiliation of the person sharing it. In the study, the experimenter firstly introduces children to four participants, two of whom belong to the child’s cultural group (living in the same country and speaking the same language as them) and two to a different group (living elsewhere and speaking another language). In the second phase, the same people appear on a screen while the children see the use of diverse, novel toys. In the third phase, the children see these toys again, and it is their job to show whom they think they learned it from earlier.

We assume that children’s performance in identifying the source may be better for external group members. It may happen because it may be worthwhile to remember the source when they use the information they share later. It will make it possible to identify the exact situation in which the information may be valid. In the case of their group members, however, the children can bring the information to the fore. We are doing these experiments at present in the 4-5 age group. (Spring - Fall, 2021)

How was it shown to me the other day?

Children rely heavily on the adults around them when learning information related to their culture. However, they are not passive recipients of knowledge. To become competent members of their communities, they must choose from whom they should learn. For example, they may choose based on the group membership of the person trying to teach them, which may be indicated by the person's spoken language. Findings have shown, including our experiments, that preschool children tend to imitate adults who speak their mother tongue, and their learning is influenced in other ways by the cultural membership of the person teaching them.

In the present study with 4-5-year-old children, we focused on exploring whether the cultural group affiliation of the person presenting the information (in this case, the spoken language) influences children's long-term memory. Preschool children participate in a two-session game. In the first session, a Hungarian or Italian/French speaker shows the participants a short sequence of steps (for example, using a toothbrush hidden under a cylinder to ring bells in another box). The children return to the lab a week later and try the very same objects. We aim to see how well children remember each step. We hypothesize that children will remember more details if the 'teacher' had previously spoken in their mother tongue (Summer - Autumn 2021).