How do babies familiarize themselves with the social world? 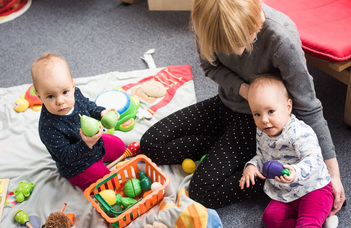 The primary goal of Babylab is to explore the processes of social cognition. How do babies start to understand the social world around them during the course of development?

Did you understand it the same way as I did?

In recent years, there have been several experimental findings suggesting the early existence of high-level cognitive functions. These include understanding others’ beliefs (also known as theory of mind) as early as 7 months of age, or the brain wave called N400 at 9 months of age, which indicates word processing. In our current research, during which babies witness a puppet show-like scenario, we use a special instrument, which measures the weak brain signals of babies, to explore the relationship that may exist between language and the development of theory of mind. Our preliminary experimental results suggest that in the presence of another person, even in the case of 14-month-old babies, a brain activation is apparent that suggests that they are processing speech from the other person’s point of view. Although the results are very promising, further thorough investigation is required. We are doing these experiments at present. (Autumn of 2022)

Good job, this is how to play with this toy - pedagogical support during the exploration of toys

Over the course of their development, children are bombarded daily with novel experiences and knowledge. They may acquire these (i) individually, (ii) via various forms of pedagogy (e.g., presenting and explaining a given object or set of rules etc.), or (iii) through a combination of both.

The fact that children employ information acquired from adults in a sophisticated manner when exploring the world and the objects within it has been demonstrated by numerous studies. While this also means that pre-acquired knowledge can influence the exploration process of novel toys, the question of how different interventions may affect children’s exploratory behavior remains unclear.

In the present study of 4 to 6-year-olds, we are interested in examining children’s exploratory behavior, when instructions are not given prior to the presentation of an object, but instead when feedback on knowledge acquisition is provided during the object’s exploration. (Winter of 2022)