How do young children understand the contextual boundaries of rules? 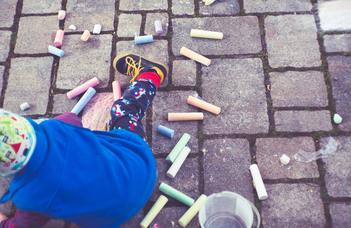 In our daily lives, we are members of many communities. It is common that certain words or gestures have different meanings outside and within a given community.

In this study,  we aimed to investigate whether children between three and four are sensitive to these boundaries of knowledge and understand that certain gestures or requests can be interpreted differently inside or outside these boundaries. During the game, two experimenters played with the participating child. They played with known objects. Some of the games had rules that included object pairs that constituted a part of our cultural knowledge (for example, key opened the lock), while others created new situations invented on the spot (key symbolized a small spoon). During the game, one of the experimenters was constantly present, while the other observed the game in one situation but left the room in the other. At the end of each play episode, the second experimenter sat at the table and decided to play herself. We investigated how children reasoned about the request of the experimenter, whether they wanted to play the invented rule or the one that could be known to all members of a cultural community.

The results show that preschoolers already follow this and choose accordingly. Thus if the experimenter saw that the key was a spoon in the last game, children were more likely to give it to her. On the other hand, if the experimenter was not in the room during the games, children were more likely to give the lock, as its use is known outside the game.