If we belong to the same group, will we know the same thing? 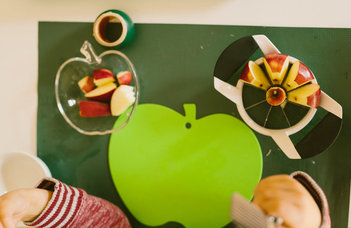 Among the projects running in the Babylab, many focus on the mechanisms of social categorization. We presume, that children, from a very young age, tend to think in social categories. They may use it as a tool for making inferences about the knowledge of others.

In our study, we used an eye-tracking system to reason about the thoughts of children. We used the spoken language as a predictor of the cultural affiliation of people. The knowledge of individuals was illustrated by object use because objects are part of cultural knowledge.

In the study, two-year-olds saw three short video scenes: In a video, a person who spoke the babies' native language used an unknown object to slice an apple. In another video, a new character speaking a foreign language did the same but with another unknown device. Watching the videos young children learned that both tools are for apple slicing, but object use depended on language.

We examined babies’ viewing patterns after the learning phase. In the test video, another character appeared and grabbed one of the previously seen tools. We hypothesized that children would expect people who spoke the same language to share common cultural knowledge, therefore to target the same tool in the same way, even in the presence of another similarly effective object.

Our results showed that children expected native speakers to use the same objects for the same goal, while they had no expectations about the foreign speaker object use.

We have shown that children use language to assess the knowledge of others. In light of this research and our previous studies, we assume that differentiating between peers in early childhood is part of an adaptive learning mechanism. Children do not just decide who knows what, but also choose from whom to learn. Negative aspects of social categorization (devaluating, excluding others, etc.) may emerge in later years as an outcome of learning and environmental effects.