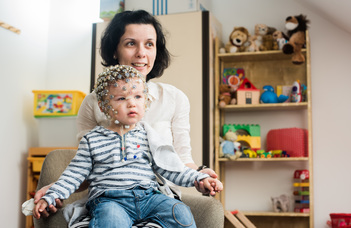 How do children begin to understand that different people may have different knowledge than they themselves? In case we are able to make inferences about others' beliefs, intentions and knowledge, how does it help us to understand the behavior of others, or even to collaborate successfully with peers?

Did you understand it the same way as I did?

In recent years, there have been several experimental findings suggesting the early existence of high-level cognitive functions. These include understanding others’ beliefs (also known as theory of mind) as early as 7 months of age, or the brain wave called N400 at 9 months of age, which indicates word processing. In our current research, during which babies witness a puppet show-like scenario, we use a special instrument, which measures the weak brain signals of babies, to explore the relationship that may exist between language and the development of theory of mind. Our preliminary experimental results suggest that in the presence of another person, even in the case of 14-month-old babies, a brain activation is apparent that suggests that they are processing speech from the other person’s point of view. Although the results are very promising, further thorough investigation is required. We are doing these experiments at present. (Fall 2019)

In our daily lives, in many situations, conventions dictate how we need to behave. One of their characteristics is that, although several forms of behavior can be efficient to achieve a given goal, based on consensus, a definite culture accepts only certain forms of behavior. For example, driving on both the right and left side is equally effective, yet what is the habit varies from country to country. In this connection, another essential feature of conventions is that they are valid within exact groups but do not apply to people outside them. For example, when traveling abroad we don't adhere to customs residents are less offended than when a local does the same.

In their present online research, we examine whether three-year-olds take into account who they belong to what culture when it comes to the convention-based scope of a rule. During the study, children see short videos in which an adult demonstrates the use of new objects to them and a puppet. After that, in other videos, the puppet can also try the tools, but he uses them differently than the adult has shown before. For one group of children, the puppet belongs to the same group as the adult who showed the objects and the participating child (lives in the same country and has the same sticker), while for the others, the puppet is a member of another group.

In the research, we wonder what the children might believe: Is the puppet allowed to do these things differently. We assume that in the case of puppets belonging to another group, the children consider the conventions to be invalid, but in the case of puppets belonging to their group, they expect them to follow the rules. In the second half of our research, we will examine what happens if the puppet is not present during the adult's presentation. How would children feel: Will they expect the puppet to abide by the rule? Our research is currently underway in the 3-year-old age group (Fall 2020).